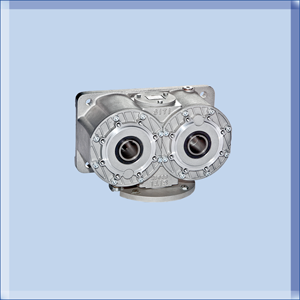 MD units are peculiar worm gearboxes, consisting of only one inlet, but two outlets mutually parallel one with the other. In fact, these units have a worm matching with two identical worm wheels, located on the opposite sides of worm. Due to this peculiar fitting, both wheels turn exactly at the same rotary speed, but in opposite senses of rotation. Therefore, the two outlets do have the same output speed, but if one turns clockwise sense, the other will rotate in counterclockwise sense or the opposite.

This specific feature makes MD’s especially suitable to applications with mixers or agitators, i.e. for all applications where some matters or substances, usually at a semi-liquid state, are to be mixed or amalgamated, especially in food industry.